The night before, my parents and I stayed at Greenbrier State Park. I only planned on going 6.8 miles today, to the first shelter north of Harpers Ferry, so I didn’t feel a need to hurry to the trail. We first looked around the historic part of Harpers Ferry, reading the signs and watching the cheesy movie (fun fact about me, I love cheesy national park movies). We then had lunch at a cute little cafe, and headed to the Appalachian Trail Conservancy headquarters.

At the ATC, I got my thru hiker tag and my picture taken. In the official picture, the one taken by the ATC employee, the one that goes in the hiker book for all the world to see, my eyes were closed. Go figure. I’ll be getting my picture taken again when I come back to go south, so I’ll just have to make sure that’s a good photo.
The ATC guy gave me some advice about Maryland, and then said, “there’ll be NOBOs who race past you and you’ll want to keep pace with them, but keep it slow and steady. Give yourself three weeks. You’ll be flying up the mountains soon enough.” I’m trying to remember his advice.

We headed down to the bridge crossing the Potomac River, the West Virginia-Maryland border, and my official starting point, NOBO mile 1025.8. By this point I was eager to get going, so I hugged my parents and crossed the bridge.

North of the river, the AT runs along the C&O Canal Towpath for about 3 miles. It was easy, flat walking. The weather was hot and muggy, except for a brief drizzle. The only annoying thing was that there was construction on the towpath! They were laying new gravel and smushing it down. Backhoes or something kept driving back and forth bringing new stone. The drivers always stopped when I got near, but it was still annoying to have to go around them all the time.
After leaving the towpath, the trail climbs up Weverton Cliffs. I was pleasantly surprised that the climb wasn’t really that hard. From Weverton Cliffs, I got my first good view.

Then it was a flattish walk to the shelter. Ed Garvey is really cool! It has an upper story, with it’s own little porch and door. I went up to that second level and stayed there with two other flip floppers, Grandpa Jim and someone who’s name I’ve forgotten. They both started south of Harpers Ferry. The one negative thing about Ed Garvey is that the water is a .5 mile hike down a steep trail. I didn’t mind it so much since I hadn’t hiked that much, but I can see hating it if you’d already done 15 miles or something that day. The biggest thing I learned on my first day? Have a snack handy. I got really hungry on my way from the cliffs to the shelter, and I had to stop and take my pack off to get at my food. I’m always gonna be keeping a snack or two in my fanny pack from now on.

Woke up to rain this morning. We all decided to stay until the rain had stopped, which ended up being around 8 or so. The trail out of Ed Garvey was pretty easy, but it was really foggy out. Gives the woods this nice mystical feeling.

Got to Gathland State Park in about an hour or so and enjoyed their running water. After that it was a cloudy walk to Rocky Run Shelter. 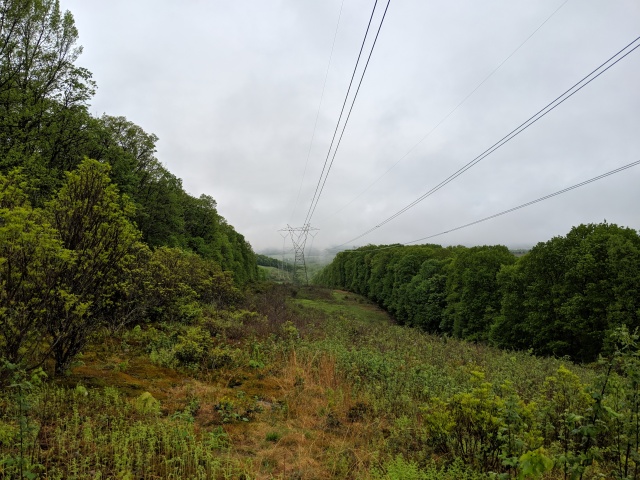 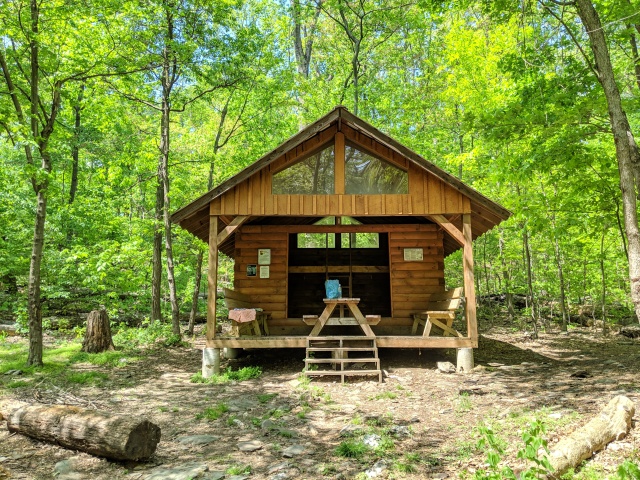 When I got there (around 1), it was completely empty. I used the privacy to wash up a bit, and then journaled and read and waited for someone else to show up. Grandpa Jim had said he would probably go farther than this if the rain held off, and the other flip flopper didn’t know if he was going to go this far.

I definitely wasn’t alone this night though! Around 3, NOBOs and section hikers started piling into the shelter. The NOBOs were Oats, Cedar (both ladies!), OTB (off the bench), and Ewok. There was also Woody, a flip flopper who started in Daleville so he was keeping pace with them. It was really nice to meet the NOBOs and hear their trail stories, but it made me wish I had a group of people to look forward to seeing at camp. They planned on doing 15 miles the next day and I seriously considered doing it too, but I knew it would’ve wiped me out and not been good in the long run. I do hope I meet some flip floppers going my pace soon though.

There was a huge thunderstorn that night and just as everyone was snuggling into their sleeping bags to go to sleep (around 9, 9:30), a group of boyscouts came out of the woods, completely soaked and headlamps blazing. Obviously it woke everybody up, except for Oats, who apparently sleeps like the dead. She complained about missing the excitement the next morning. We didn’t have room for all of them in the shelter, but there was the old shelter down the hill, so some of them had to move there. Don’t really know what their troop leader was thinking, leaving their cars at like 7 and expecting a shelter to be empty on a Friday night. Made for an exciting night for those of us warm and dry in the shelter though.

As we were all breaking camp, OTB suggested the trailname Acadia for me, since I had been talking about working there the night before and seemed to really love it. I told him I’d think about it. I do like the name, has a nice ring to it, but I ultimately decided I wouldn’t go with it. Didn’t feel quite right since I only worked there one summer.

As I was hiking out, I got my first trail magic! Two ladies were out hiking and they had a bag of goodies they were giving to thruhikers. I only took one mini Hershey bar, since that hiker hunger hasn’t really kicked in, but it was still exiting!

Got to the old Washington Monument, but it was under construction and didn’t get any views because of the fog. But I did meet my first two flip floppers who started in Harpers Ferry! Hulk and Tortoise, a couple (I’m assuming) who started May 1. They’re going a but slower than I am, so I may not see them again for a while.

Got to Pine Knob Shelter for lunch, and debated whether to stay there or hike on to where I had planned on camping, the Pogo Memorial Campsite.

There were thunderstorms predicted for the night and I didn’t really want to tent camp in that. I ultimately decided to push on, partly since I didn’t want my day to be only 7ish miles and partly because it was supposed to rain all day the next day, so I was gonna get wet anyway.

Got to camp and had a good few hours before the rain started. Soaked my feet in the cold stream, which felt real nice.

Once the rain started, it didn’t stop. Tent did well in the rain, no big wet getting in, though I did have some dampness getting on my sleeping bag. Not sure if it was just condensation or mist coming in from the nets.

It ended up raining all night and was still raining as I got up. Had to cook my breakfast in the vestibule of my tent. The trail ended up being essentially a river for most of the walk today. 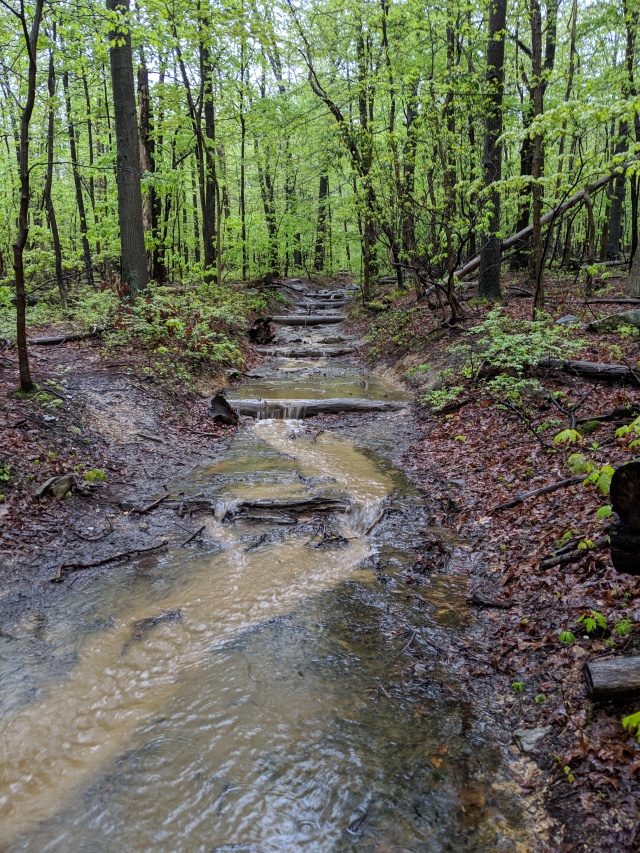 For the first few steps I tried to keep my feet dry, but I gave up pretty quickly. Other than that though I really enjoyed walking in the rain. Kept it cool. My pack felt pretty heavy because of my wet tent but my legs are still feeling good.

I got to Ensign Cowell Shelter a little before 11 and stated there for a long lunch. I let my feet dry out, so I could get them wet all over again. At the shelter there were two other people drying out. One was a NOBO named Toast, the other a south bound section hiker.

The second half of the day, to Raven Rock Shelter was much more tiring. The rain never stopped. There was also two streams to cross, which I’m sure in the summer are no problem. However, with all this rain, they were pretty rushing.

That’s the first stream, with a sign saying to take a detour if it was dangerous because the next one would be even worse. I ended up ignoring that sign, and the second one was much worse! Came up to my thighs. It wasn’t the worst Ford I’ve ever done, but I wouldn’t recommend it to anyone with balance issues or no experience fording rivers.

At Raven Rock, it ended up being just me, Toast, and a section hiker. Neither of the other two were very talkative, so it was a quiet evening. It was actually one of my favorite nights on the trail though. Really peaceful, got a lot of reading in, and the woods sounded really nice once the rain stopped and the winds started blowing.

Into town! I only had 4.6 miles to go today, so I took my time. I also had to take my time because the trail was kinda of rough for those miles. No big UPS or downs, but lots and lots of rocks, which slowed me down. I know everyone talks about Rocksylvania, so I guess I’m just getting a little preview.

Once I got to Pen-Mar Park, I called a shuttle guy to get me into Waynesboro, PA. I’ve never hitch hiked before, so I don’t really want my first time to be alone. Hopefully the next time I need to get into a town there will be other hikers around to hitch with. I stayed at a hotel right by a Walmart with a Subway, so I got lunch, resupplied and lazed around for the rest of the day. Pretty relaxing. Into Pennsylvania next!